A Slow Descent into Madness 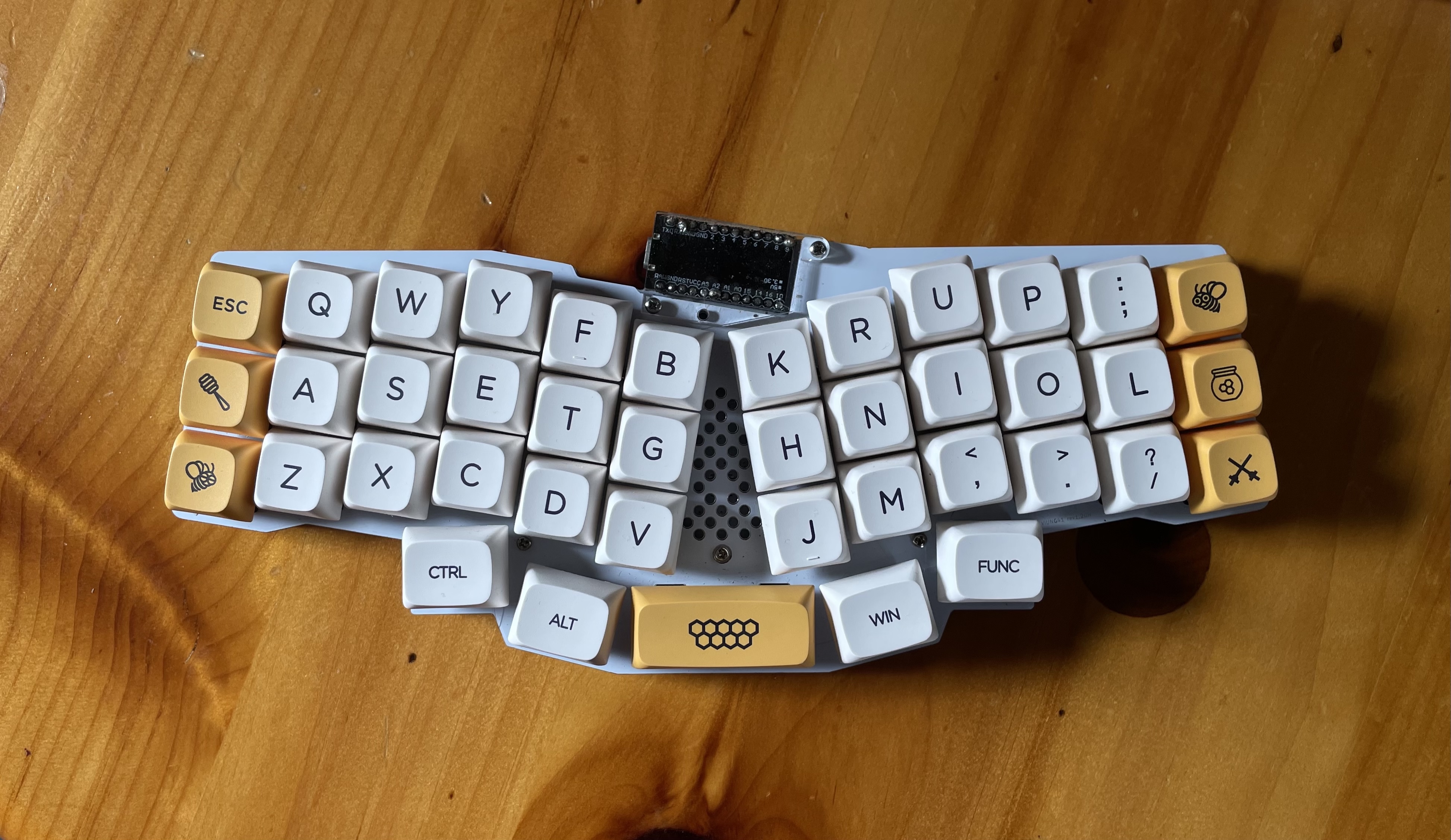 To be clear, I’m really not into mechanical keyboards.

Unlike most who end up with this kind of thing, I’m neither a hardware geek nor a fan of luxury stuff. I just wanted to learn how to touch type! This all happened through a series of innocent-seeming questions that taken all together ended me up in a very strange place. Let’s walk through this train of thought, so that by the end, I might not seem so crazy.

Wow, is the backspace key far away or what!

If you’re currently sitting at a desktop or laptop, try putting your hands on the keyboard in front of you, in the “correct” touch-typing positions (left hand on the ASDF keys, right hand on the JKL; keys). Then, whoops, you mis-typed a word – time to hit backspace! Try it out, how do you accomplish that action?

Odds are, you just needed to lift nearly your entire right hand off the keyboard in order to reach the key. Considering that backspace is one of the top 3 most often used keys, having it located so far from the home row as to require removing your entire hand from the keyboard doesn’t seem like the most ergonomic plan. And indeed, lots of other keys are in a similar situation – if you want to add a word in the middle of your sentence, I dare you to move your cursor with the arrow keys without picking up your hand or breaking a finger.

The fundamental problem here is that there are too many keys on a standard keyboard, even those on laptops. If the goal is to keep all fingers comfortably on the home row, then having a key even two “units” away from a finger’s natural resting place is a (literal) stretch, and any further than that is plain infeasible. So, if you have 8 non-thumb fingers with which to press keys, what’s the maximum number of distinct keys we can actually support?

Just 36 keys in total. A far cry from even the 78 on my already-small Macbook!

This sum, plus a few for the thumbs, is what defines a “40 percent” keyboard. If you wonder the (very legitimate) question of “okay, sure, but, can you still type numbers…?” then let me defer you to this great interactive blog post introducing the concept of layers.

Okay, we have our handy-dandy new 40% keyboard, and we’re well on our way to ergonomic touch-typing bliss.

Well, this post has got quite some words left in it, so we can probably infer there’s a bit more to the story. In this case, it has to do with the way the grid on the keyboard “lines up”.

If you were to sketch a computer keyboard from memory, you might well draw the keys in a perfect grid – but if you look down at what you’re typing on (or up to the earlier photo), you’ll see the situation is actually a little weirder.

The keys on a standard keyboard (and even most 40% ones) are what we call row-staggered, in that each row is a bit offset from the one above it. A long time ago, this design was implemented in typewriters to prevent the arms from jamming up when the typist was really going at it. Now, however, it just serves to add some extra inconsistency to how your fingers need to move when touch typing. Moving your left index finger down from the F key? You might get the V you were hoping for… or you might get the C instead, or even miss entirely and hit the area between keys.

There’s some nontrivial annoyance in needing to remember these small lateral adjustments, along with a debatably heightened risk of RSI. Is it a huge deal? No, but if you’re learning to touch-type from scratch anyway, why not learn on a keyboard laid out for humans, instead of one tied to mechanical limitations of the past?

Well, we’re definitely entering funny-looking territory here, but this layout totally solves our problem. It’s called “ortholinear”, which is to say the rows are not staggered, and it even introduces a slight column stagger instead, which is just real comfy to use since some fingers are longer than others. See – laid out for humans!

And in fact, we can get a bit more mileage out of that “if you’re learning to touch-type from scratch anyway” comment up there.

Let’s take a closer look at our right hand in this close-but-no-cigar setup we’ve got so far. The home row places the letters J, K, L, and the semicolon key directly underneath our fingers – the most effortless ones to press. Those who spend most of their computer time trying to patch together run-on sentences in their emails are living the dream!

As for the rest of us, the semicolon key isn’t nearly as useful as, say, the P key, which is conveniently located in a position that seems close until you realize that your pinky finger is tiny and already stretched about as far as it’ll go just to reach the home row. In general, there is absolutely no correlation between how often a letter is needed and how conveniently it is located on a QWERTY keyboard, which can make touch typing feel like quite a contortion. 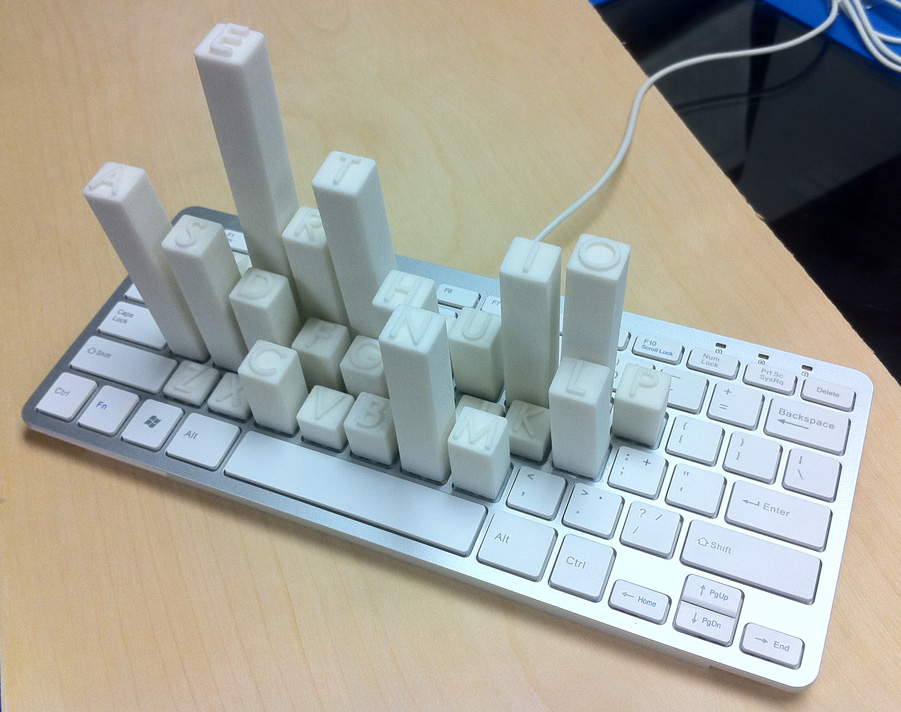 Above is a photo from the old blog of a grad student at NYU, where the frequency of each letter’s use is represented by the height of its column. The visualization does a good job of highlighting the utter nonsense we subject ourselves to every day.

But I mean… we’ve got ourselves a programmable keyboard… what if we just, kinda, took all those tall bars, and scooched them a bit so they’re on the home row…?

I personally ended up with a layout via trial and error that felt comfortable to me – it has the most commonly-used keys under my fingers, but most letters don’t deviate too much from where I’m used to them living in the QWERTY layout, which made it easier to learn. To be fair, I was just bored the weekend I did this. For most people I’d recommend they go for the well-established Colemak or Norman layouts that helped inspire mine.

It took me about a month on this setup to get back to my hunt-and-peck typing speed from before (about 70 WPM). These days, 2 or 3 months in, I’m consistently faster (about 90). And it’s a whole lot more comfortable to boot – not having to ever look at the keyboard or move my hands from the home row, even for special characters, is enlightening.

In addition, because the weird new layout isn’t that different from QWERTY, it hasn’t had much if any effect on how I type on phone keyboards or other peoples’ computers – I just default back to the hunting and pecking and it’s like riding a bicycle. An old rusty one, which also has a flat tire, but still.

Moral of the story, I’d recommend it to anyone… or, at least anyone who doesn’t mind some funny looks from strangers walking by their desk!